SAOT in the Framework of FAU

The integration of SAOT into the university is shown in the figure below, in which also the structure of SAOT is roughly displayed. As a basis for the coordination of the structured doctoral programs in different research disciplines, FAU has established a graduate school that provides the institutional framework for different graduate schools at the university. The FAU Graduate School itself does not have any particular thematic focus but establishes classes in different research fields. SAOT is one of the interdisciplinary classes. The FAU Graduate School provides several supporting measures for the structured and guided progress to graduation, besides support for incoming and outgoing post-graduates, key qualification courses and foreign and German language courses, social programs, e.g., the eScience and eQualification environments for the individual doctoral programs.

SAOT in the Framework of FAU

The SAOT is administered and organized in its daily activities by the SAOT Board of Directors (BoD) consisting of the Coordinator, the Co-Coordinator and the Director of Administration. The Coordinator and Co-coordinator are elected for a time period of two years by the Graduate School Executive Committee (EC) which forms the core of the decision making processes.The Board of Directors is responsible for all research and educational aspects of SAOT`s daily activities and in particular for the admission of the students, the course program and the assignment of Mentors at all different levels of supervision and mentoring. The BoD is responsible for all SAOT activities and decisions to defend in front of the university executive board. It allocates the SAOT funds on the basis of the performance of former research activities of the applying principal and associated investigators as demonstrated by the quality of the resulting publications and of the quality of the applications describing the planned new projects. These applications have first to be evaluated by at least two other principal or associated investigators who are not involved in that particular project. The Board of Directors organizes the annular worldwide competition for the Young Researcher Award in Advanced Optical Technologies (YRA) and selects the recipients of the SAOT Innovation Award and of the SAOT Student´s Awards. It is assisted by the Administrator of International Students’ Affairs who takes over the responsibility for monitoring the performance of the doctoral candidates relative to the credit point system and in particular for the special mentoring of the doctoral candidates with respect to the international affairs of the education program. 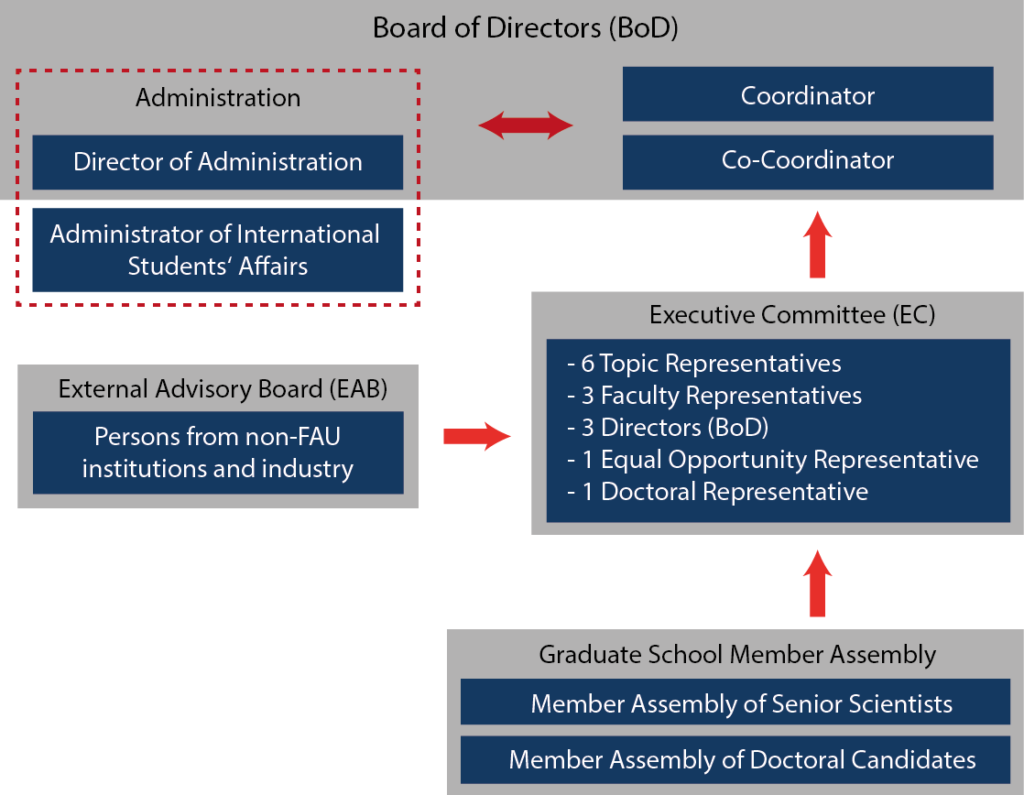 SAOT is controlled by the EC consisting of delegates of each of the three involved faculties as well as one delegate for each of the six main topics, the BoD, one representative of the DCs, and the equal opportunities commissioner, forming in total a body of 14 persons. The delegates are appointed by their respective faculties and elected by the faculty members of the main topics. The elected members simultaneously take over the main responsibility for the scientific activities of that main topic. The committee controls the Board of Directors in its activities and is thus indirectly also responsible for the allocation of the SAOT funds, the admission of the students, the course program and the assignment of Mentors. It also elects the Coordinator and Co-Coordinator for a time period of two years. The minutes of the EC meetings are distributed to all SAOT PIs, AIs, Mentors, Ambassadors, the elected representatives of the doctoral researchers and the members of the External Advisory Board (EAB). Sub-committees may be formed, e.g., for the pre-selection of candidates.

The EC is assisted by the EAB consisting of internationally renowned scientists and businessmen from the field of optical technologies whose members are elected by the EC from a list proposed by the graduate school member assembly. The EAB monitors the quality of the graduate program and the progress of development of SAOT

The Graduate School Member Assemblies (GMA) meet at least once a year, separately the assembly of the senior scientists (all PIs, AIs, Mentors and Ambassadors) and the assembly of the doctoral researchers. Both assemblies are informed by the BoD on the progress, the new projects started or planned and on all the other activities of SAOT which may be of particular interest. The GMA of the senior scientists proposes the members of the EC to be selected and the members of the EAB to be selected by the EC. Besides becoming informed by the BoD on the SAOT status, the GMA of the DCs discusses items to be of particular interest of the DCs. Additionally the doctoral candidate is elected (and two substitutes), who represents the concerns of the doctoral researchers in the EC meetings.