The educational program is specified by the mission SAOT has defined for its research and educational activities being characterized by the five keywords:

SAOT provides an interdisciplinary research and education program of excellence within a broad international network with worldwide leading experts in order to promote innovation and leadership in the fields of optical metrology, optical material processing, optics in medicine, optics in communication and information technology, optical material and systems, and computational optics.

The graduates should achieve a high level of personal responsibility for their educational progress very early. With the help of their mentors, they will have to determine their research topic for the doctoral thesis within the first half year after admission to SAOT. The structure of the SAOT education program is displayed in more detail below. 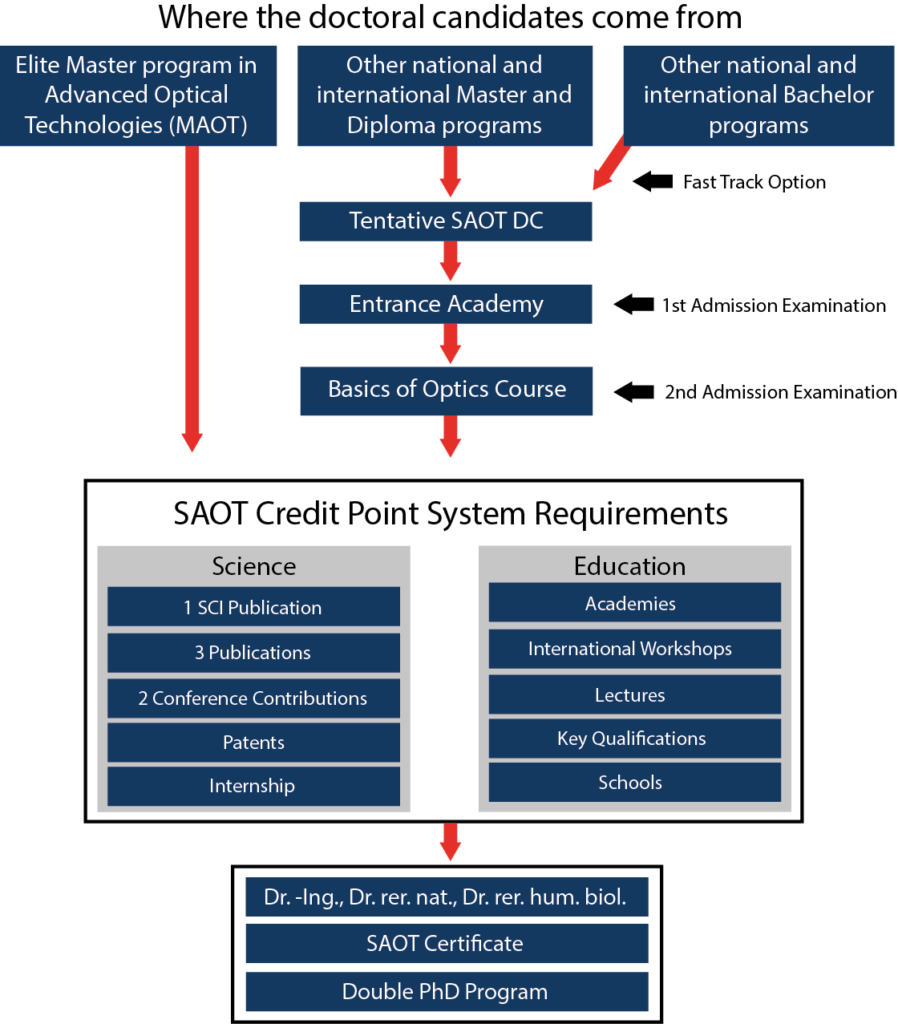 Due to the different status of knowledge of the graduates in optical fundamentals and in different application fields, at the beginning of the course program a common entry basis for all graduates is established by a one-week Entrance Academy before admission. In this academy all new graduates (tentative members) come together to acquire this common basis of knowledge by lectures and discussions on fundamentals and on all SAOT research topics of each field. At the end of the academy a written examination must be passed to reach admission and to become a regular SAOT member. Graduates who do not pass this examination successfully will be allowed another two months to revise this knowledge besides the regular SAOT program. Otherwise they will have to leave the graduate school.

Each DC has to select three different topics out of the six main topics described in the Academic Profile for specialization. This measure warrants the interdisciplinary character of the education allowing the DCs to recognize and handle the border problems between different application fields in optical technologies. This ability is one of the main targets of this kind of joint education. The education and training program typically lasts for 3 to 4 years. During this time period the candidate has to collect at least 90 credit points (CPs) defined in the Credit Point System (CPS).

Doctoral candidates come from different faculties of the FAU. They will also be awarded their doctoral degrees (Dr. rer. nat., Dr.-Ing., and Dr. rer. biol. hum.) from their home faculties according to the corresponding regulations.

SAOT will coordinate and enforce the research training and educational program. This includes the interdisciplinary courses and seminars and in particular the joint topic “Fundamentals of Optical Technologies” as well as soft skills courses and the international students language courses, for foreign DCs in addition to the credit point activities. The SAOT certificate given to the DCs after completing the SAOT program successfully confirms the personal achievements of the DCs during the program. It has already been validated to some extent by the establishment of a student chapter of the International Society of Photo-Optical Instrumentation Engineers (SPIE) at SAOT and another student chapter of the Optical Society of America (OSA) at the Max Planck Institute for the Science of Light (MPL).

The most relevant pillars of the university’s activities, Optics – Medicine – Engineering, are involved in SAOT. Advanced interdisciplinary research and education in these fields is the primary criterion for the construction of SAOT.

The Credit Point System (CPS) has been introduced to guarantee the intentions given in the SAOT mission reflecting also the excellence of the SAOT program.

The 90 CPs which must at least be earned can be collected in three different sections with minimum CPs to be collected in two of them: the science section with 45 CPs and the education section with 30 CPs. The science CPs can be collected, e.g., by journal publications – preferably in SCI periodicals – and conference contributions, by patents and internships and visits at foreign research institutions. The education CPs may be collected by a variety of different activities: attendances at academies, workshops, the monthly get-together, lecture courses or key qualifications. An examination in Optics Fundamentals is compulsory for all DCs (except MAOT graduates who have past this examination during the MAOT program). All necessary 90 CPs can be collected in the science and education sections, 15 of them can, however, also been earned by additional non-obligatory teaching or funding activities or by awards earned. More details on the CPS and the regulations how to collect the CPs can be found here.

Main components of the educational program are formed by the

A review about all previous events (academies, workshops, key qualifications, seminars and lectures) is given here.

The internationality of the graduate school has been achieved by several different structural arrangements, the involvement of international partner institutions and the integration of international guest professors and lecturers. This is possible by the broad international network with distinguished experts in their field which SAOT has established and expanded yet.

The innovative character of the SAOT research and training activities is based on the novelty of ideas coming from a strong fundament of knowledge being created by an extensive experience in the particular field, their implementation into practical research and the transfer into commercially available systems and products. In all these steps the DCs are involved. To kindle innovations, SAOT will run DCs “innovation competitions” with short proposals for “blue sky research ideas” in which the best ideas will be awarded the SAOT Innovation Award with a prize money of 20,000 Euros to carry out feasibility studies.

Special educational steps for the highly talented DCs are introduced to prepare them for leadership tasks in science, industry and society, e.g., by key qualifications and by heading research projects and groups.