The Biophysics Group at FAU

The Biophysics Group at FAU

The Biophysics Group at FAU investigates a broad spectrum of research topics ranging from the microscopic study of proteins and cells to the macroscopic observation of penguins in Antarctica. In each field, data acquisition via cameras, microscopes, and photodetectors is combined with elaborate image processing algorithms.

To judge the ripeness of a fruit or the sturdiness of an appliance, we push, press, or knock on it. In physical terms, what we measure are the viscosity and elasticity of the object. Physicians use the same principle to diagnose tumors or inflammatory processes below the skin. Likewise, mechanical testing of single cells can be used to screen for diseases. For example, abnormally high elasticity in combination with low viscosity are often signs of cell stress or impending cell death.

The Biophysics Group is developing an easy-to-use, versatile, and inexpensive setup for measuring the viscosity and elasticity of living cells. Cells are suspended in a viscous fluid and then pushed with high pressure of several atmospheres through a capillary that is not much wider than a human hair. The researchers determine cell viscosity and elasticity from the movement and the deformation of the streaming cells using bright-field and fluorescence microscopy and a neuronal network for image analysis. The method measures up to 100 cells per second and can be used for investigating cell functions such as the mechanical role of cytoskeletal proteins, or signal transduction pathways. It could also be used to tune cells for 3D bioprinting applications, as a screening tool for drug testing, or as a diagnostic tool to detect diseases. 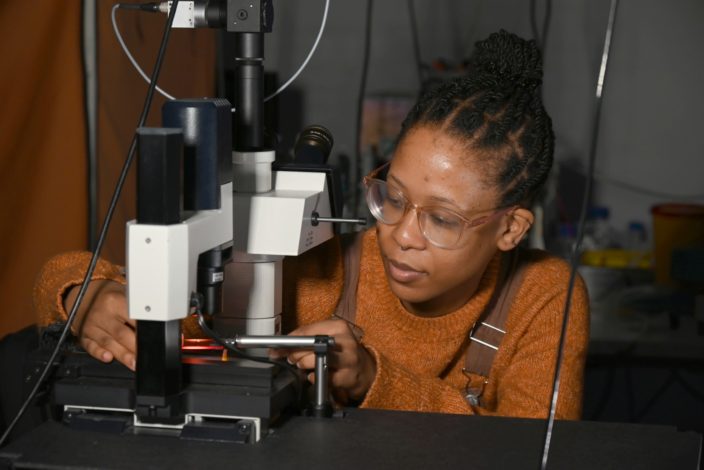 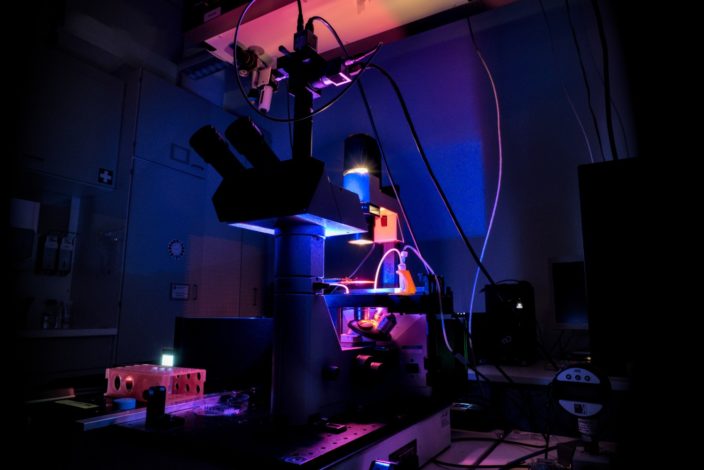 Full image of the bright-field and fluorescence microscope
(Enlarge) 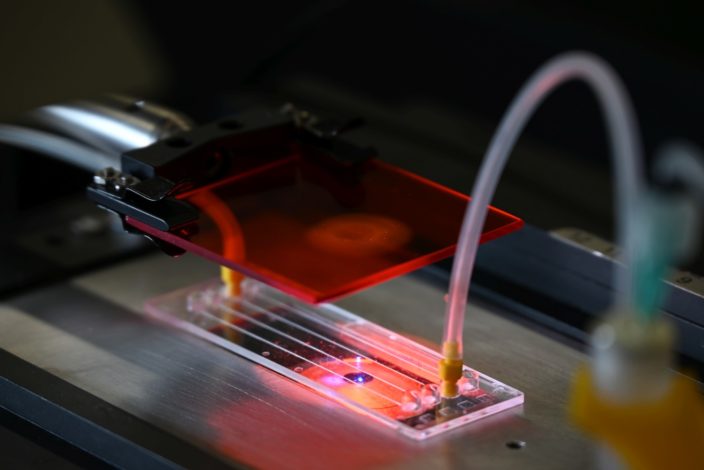 Close up of the capillaries where the cells stream through
(Enlarge) 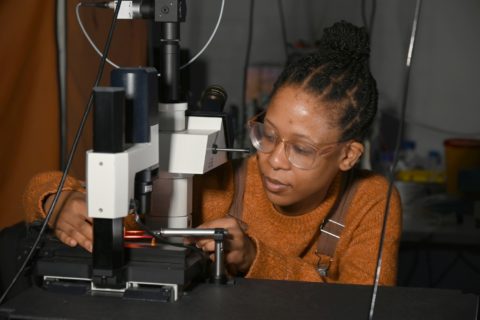 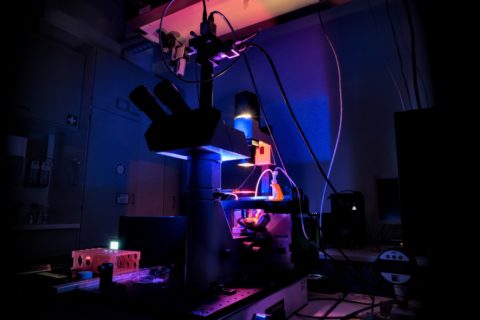 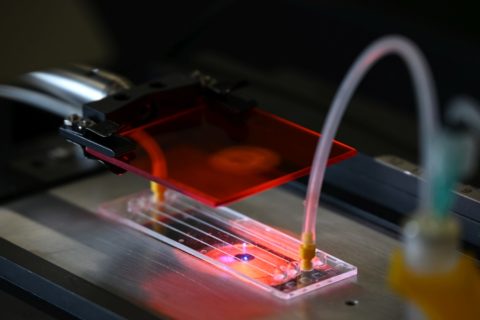 Every cell in the human body is mechanically and structurally stabilized by a complex network of filamentous proteins. Among these, intermediate filaments such as vimentin, keratin, or neurofilaments, are essential components that are found in all of our cells. Their assembly from single units to larger filaments influences numerous cell functions, such as the formation of tissues and organs during embryonic development. In many diseases, the assembly of intermediate filaments is disturbed, for example in metastatic cancer.

The Biophysics Group studies intermediate filament assembly in real time. They utilize a physical phenomenon we all know from our everyday life: Rayleigh scattering, which

causes the sky to appear blue as tiny particles in the atmosphere scatter mainly the short bluish wavelengths of the sunlight. According to Rayleigh scattering theory, the intensity of light scattered on filaments increases linearly with the molecular weight, at least for small filaments. Via that, the researchers are able to observe the formation of vimentin filaments in a reaction chamber.

But as the filaments grow to a length beyond the wavelength of light, the scattered light intensity increases less and less. This is where the researchers had a new idea: by illuminating the reaction chamber with light of two very different wavelengths and taking the ratio of the scattered light intensities, they can measure the shape and length of the growing filaments. With 1,000 data points per second, the researchers gain real-time insight into the assembly process. This paves the way for an in-depth analysis of numerous diseases, some of them extremely severe, where filament assembly goes wrong, such as genetic muscle disorders.

Protection of surfaces from contamination

Bacteria in the medical sector and algae in the maritime industry – two diverse examples with the same challenge: surfaces must be kept clean from undesired biofilms. This ensures germ-free medical equipment and avoids the accumulation of seaweed on the hulls of ships. Thus, a lot of effort is invested in the development of functional coatings that prevent these organisms from populating these surfaces.

A well-known example of a self-cleaning surface is the highly structured leaf of the lotus flower, where water droplets rinse it without wetting the leaf. However, mimicking this lotus effect on an industrial scale fails until today, due to the poor mechanical stability of these surfaces and other limitations such as the metastability of the trapped air. Another approach for ultra-repellent surfaces was introduced in 2011. It is based on infusing a fluid into a porous substrate and thus creating a surface layer, which is extremely smooth down to the molecular scale. This novel technology repels water and oil as well as microorganisms and even insects. But it comes along with a rather complex coating process and requires either toxic or very expensive compounds.

This is where the Biophysics Group in conjunction with material scientists come into play. The researchers recently presented a method where they pour common silicone oil onto solid substrates and subsequently illuminate it with ultraviolet light. This results in an ultra-thin protective coating, on par with the one established in 2011, but being eco-friendly, easy to implement, and extremely low-cost. Applied to stainless steel, it creates a self-cleaning surface that excellently repels algae and blood. It also reduces corrosion even on severely damaged surfaces. At the same time, thanks to its basic single-step application process, it is applicable on large industrial scale and with a variety of materials. That is why LISS, as the researchers abbreviate their liquid-infused slippery substrates, may not only keep ships or medical instruments clean but will also enable a wide range of further applications in the future.

When speaking about biophysics, one may not think about Emperor penguin colonies in Antarctica. But indeed, physical models can help us understand the astonishing collective behavior of thousands of Emperor penguins within a colony. The Biophysics Group applies wave theory and phase transition concepts to the formation and behavior of penguin huddles. Penguin huddles are tight groups of several hundred individuals that warm each other under the extreme conditions of winter in Antarctica. A current project is to monitor the health status of the entire colony based on the timing of huddle formation: When penguins begin to huddle already on days with mild temperatures and low winds, this could be a sign that they have lost too much of their insulating fat layer and are freezing.

There is growing interest and pressure from nations with large fisheries to exploit the rich krill sources of the Southern Ocean, which is the most important food source for Emperor penguins. But attempts to establish marine protected zones are hampered by the same nations with arguments claiming that not enough is known about the negative impact of overfishing. To collect much-needed data, the Biophysics Group installed time-lapse cameras and observatories in Antarctica to monitor penguin colonies all year round. Using image processing technologies adapted from particle tracking software in the lab, they are able to automatically analyze the images and are investigating how bird counts or huddling behavior have changed over the past years. The researchers hope to increase public awareness of the deteriorating environmental conditions in Antarctica and to increase public pressure on agencies responsible for commercial exploitation and protection of the Southern Ocean. 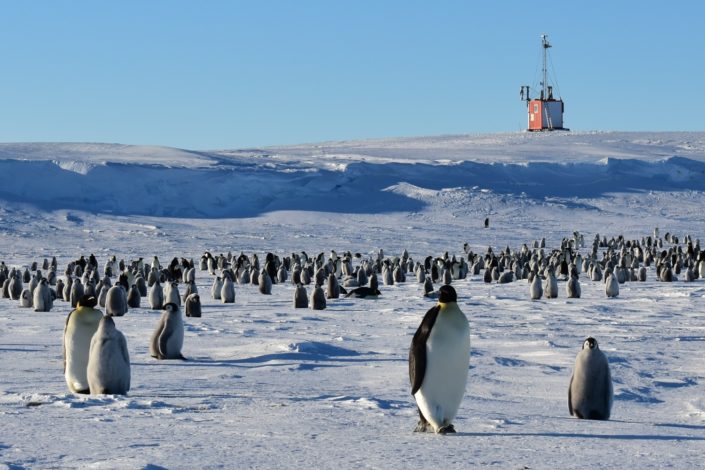 The observatory (in the back) constantly monitoring the Emperor penguins 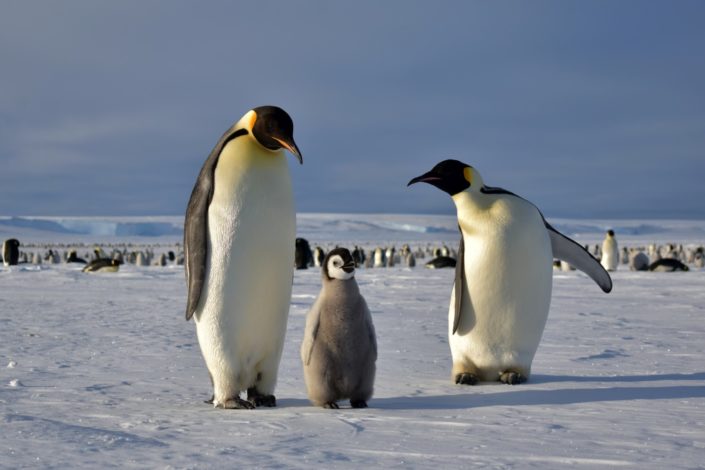 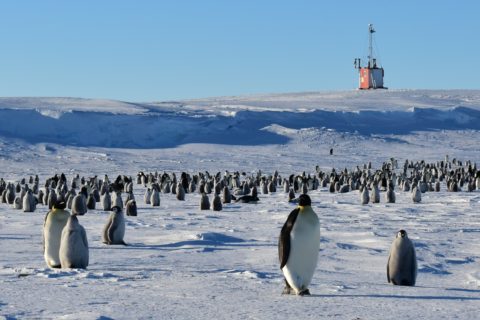 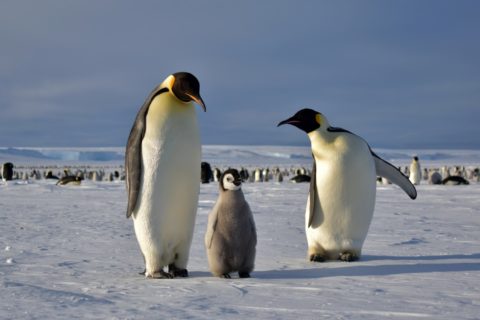