The year 2021 was the 30th anniversary of the initial proposal by Philip Russell for a novel type of optical fiber that would guide light by the newly-proposed photonic bandgap effect: photonic crystal fibers (PCF). Compared to conventional step-index fibers, the very first solid-core PCF, with arrays of tiny hollow channels running along their length, offered enhanced control of dispersion, higher optical nonlinearities and birefringence, and so-called „endlessly single-mode“ behavior.

Russell‘s group reported the first working PCF in 1996 at Southampton University. After a series of papers that are amongst the most highly cited in the entire field of photonics, Phillip Russell arrived in Erlangen in 2005. Since then Erlangen has become recognized as the world-leading center of research not only on PCF itself, but also on its myriad applications.

In addition to telecommunications, faster optical interconnections between computers, quantum key distribution, biomedicine, environmental sensing, and laser manufacturing, PCF play an increasingly important role in the development of all kinds of novel laser-based light sources. Within Germany, there are only two non-commercial locations where these optical fibers are drawn: Jena and Erlangen. 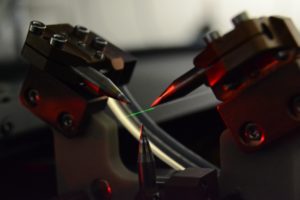 Today, the Max Planck Institute for the Science of Light (MPL) in Erlangen is the site of a world-leading fiber fabrication facility that develops and manufactures photonic crystal and microstructured optical fibers. In collaboration with companies, academic research groups and government agencies from all over the world, many highly cited publications were released over the past 17 years: since 2005, the Web of Science records more than 240 journal publications on PCF from Erlangen, with about 10,000 citations and an h index of 50. 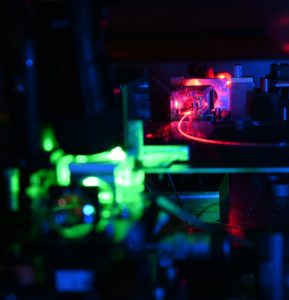 One exemplary application of PCF is ultra-broad-band supercontinuum generation pumped by near infrared pulses. An immediate success ensued in frequency metrology, where PCF were use

d to generate octave-spanning femtosecond frequency combs.
Such controllable sources of non-classical light can also be used for quantum optics technology. The group of Nicolas Joly aims at engineering a source of pairs of photons with extreme frequency separation so as to access regions of wavelength that are not conventionally accessible while keeping the quantum properties of the source. 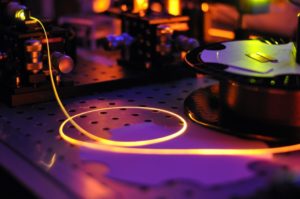 A further use of PCF is to utilize them as micro-reactors for chemistry. It is then possible to monitor chemical reactions.